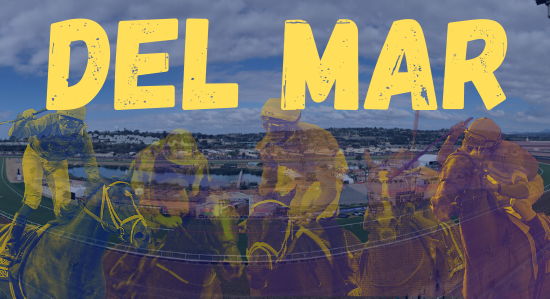 There’s a rematch brewing in this weekend’s Pacific Classic (G1) at Del Mar Racetrack. Last time we saw Maximum Security and Midcourt, they were duking it out in the San Diego Handicap (G2). It had been a thrilling race; Midcourt had snatched the lead from Maximum Security at the start of the race, tearing up the backstretch with his head held high and his ears pricked, only for Max to charge back at him in the stretch and nab the race by a nose despite carrying five more pounds than his rival.

This time the two horses will be on equal terms as all six starters in the race will carry 124 pounds. After having beat his two main rivals for the Pacific Classic – Midcourt and Higher Power – in the San Diego Handicap, Maximum Security will undoubtedly be the favorite. Still, the race may not be a walk in the park for Maximum Security.

Midcourt has run at Del Mar three times and won there twice, breaking his maiden at the track in 2019 and winning the Native Diver Stakes (G3) later that year. He’s a two-time graded stakes winner and though he has never won a Grade 1, he hits the board in almost all of his races. He will be ridden by Victor Espionza, who won the race in 2016 with California Chrome.

Higher Power won the 2019 edition of the Pacific Classic. Though he hasn’t won a race since, his trainer John Sadler says that he is improving every day. His high ranking workouts definitely stand as proof of that. Additionally, this colt seems to perform his best at the Pacific Classic’s distance of 1 ¼ miles. Sadler trained the past two winners of this race, Higher Power and Accelerate. If Higher Power wins this race for the second year in a row, he will join Tinners Way (‘94, ‘95), Skimming (‘00, ‘01), and Richard’s Kid (‘09, ‘10) as the fourth horse to do so.

An Aregetinian horse named Mirinaque will be making his first start in the U.S. in the Pacific Classic. He is a talented racehorse down South, a winner of four races including two Group 1s. He has only finished out of the exacta once in his entire career (a fourth place finish in the Group 1 Jockey Club). This grey colt has been training well at Del Mar and will be looking to prove his star power stateside.

Peter Eurton’s Dark Vader will be one of the longer shots on the board. The Ohio-bred horse has never won a graded stakes race, but he has hit the board in three of them. He is coming into the Pacific Classic off of a hard fought victory over Potantico in an Allowance at Del Mar. Though Dark Vader isn’t as accomplished as many of his rivals in the field, he is training good and has the benefit of being piloted by the track’s leading jockey Umberto Rispoli.

Sharp Samurai is another consistent and talented horse entered in this race. At six-years old, he is the oldest horse in this field. He has won four graded stakes races and hit the board in six others. He mainly runs on the turf, but has proved himself as one of the fastest and most talented horses in this field with exceptional Equibase speed figures. He may have a shot at upsetting Maximum Security, but only if he can transfer that ability from turf to dirt while also stretching out in distance.

Clearly, Maximum Security is the most well-known and accomplished horse in this field. He has won three Grade 1 races and is currently on a five-race win streak. He only defeated Midcourt by a nose last out, but he had to deal with aggressive riding tactics from other jockeys and it was his first race back after a five month layoff. Additionally, the San Diego Handicap was 1 1/16 miles compared to the 1 ¼ mile distance of the Pacific Classic. Trainer Bob Baffert has won five Pacific Classics. A sixth victory with Maximum Security would tie him with trainer Robert Frankel for the most Pacific Classic wins.

Even though the Pacific Classic has drawn a field of just six horses and has had his purse cut in half ($500,000), the race still features some promising older horses. Each of them will be taking aim at champion Maximum Security and will all be vying for a spot in the starting gates for the prestigious Breeders’ Cup Classic.

Kaeli Bartholomew from Champions of the Track

Check out Champions of the Track for amazing thoroughbred racing content and follow their social media channels for more fun stuff.