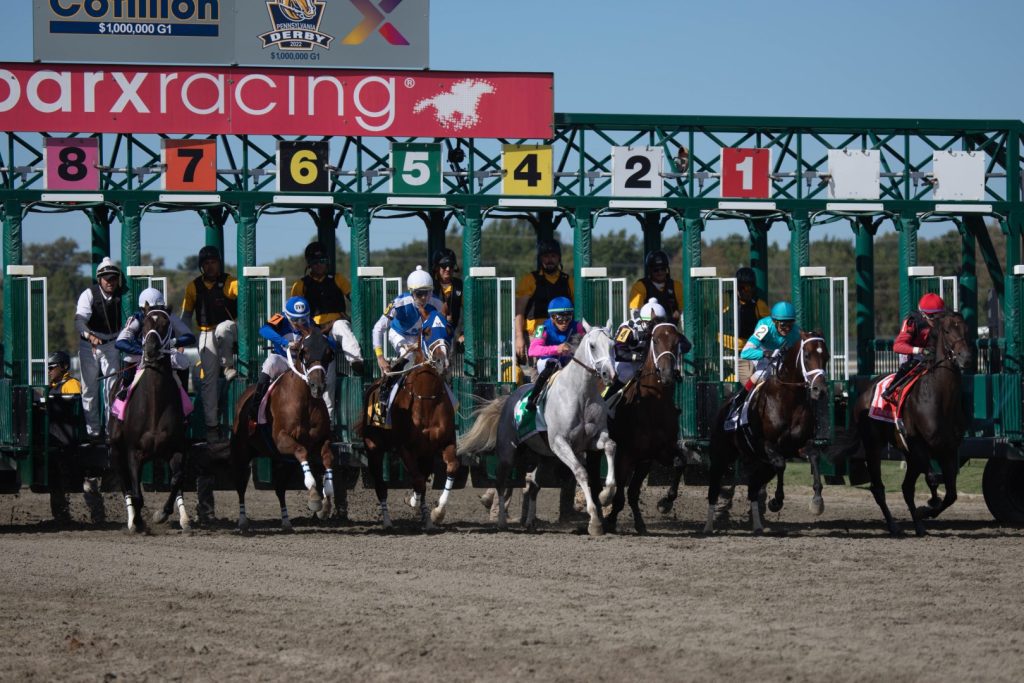 Saturday’s races at Parx racetrack near Philadelphia, PA did not disappoint. A 13 race card with full fields brought in star horses from all over the United States including New York and California.

StableDuel hosted two contests on the day where over 100 players participated in both. The same stable captured the win in both, BEGGSIE with a well rounded strategy and some interesting winners to put him ahead of the rest.

What superstars grabbed the day? TAIBA had an impressive turn of foot to capture the PA Derby trophy against Zandon  and  Cyberknife.  TAIBA thankfully didn’t disappoint the SD players that chose him at the top price of $8,500 putting up a clean 63 pts.

Big disappointment of the day for StableDuel players was Tawny Port who was a $3000 purchase and just didn’t fire against the stacked field. Fan favorite White Abarrio put in a good effort for a 5th place finish behind Paco Lopez and Simplification which cost SD players only $1000 putting up 13.15pts.

The fun line up came in the price prior where the ladies competed for their $1 Million prize in the Cotillion. TWO value players crossed the finish line first with the speedy SOCIETY breaking from the gate early and never letting anyone past navigated by the frenchman Florent Geroux. Only costing her players $3000 with the morning line odds of 8/1, Society put up a hefty 65.75 pts and was followed by the BIG VALUE of the card, Morning Matcha at $500 putting up 34.25 pts for second position.

Secret Oath seemed tired but still fought up for third with Luis Saez aboard bumming her fans out with only 22.25 pts but still showing her talent within a tiring campaign. Big disappointment in this race has to go to Adare Manor with Mike Smith aboard. Finishing outside the money for a $7,500 buy, she cost players 19.25 pts  behind the white faced Shahama. Thankfully Mike fired hard in the next with Taiba to  make the trip from CA worth it for the group.

These two races lead us to the StableDuel winning stable, BEGGSIE. 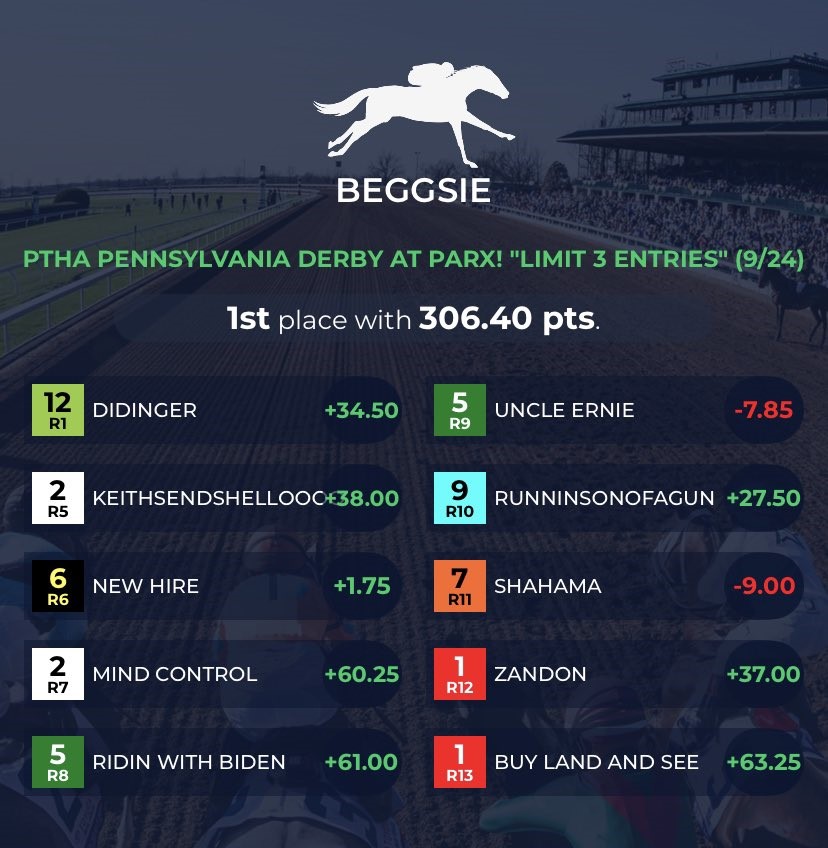 Neither choices of Society or Taiba is what got him to the Top Spot – more so his undercard races moved him up the leaderboard with his big winner on the day, RIDIN WITH BIDEN. This Constitution gelding trained by local Parx trainer Robert Reid, Jr broke to the front, controlled the pace, and keeping his head down the entire way didn’t let anyone cross his path. With a StableDuel value cost of only  $3000 -only 26 out of the 225 stables selected him (could have been the name too) and gave BEGGSIE a bit of a bump forward in the standings after his high priced pick MIND CONTROL ($9800) also won. Three others gaave him a nice 2nd place points bump including DIDINGER ($7,500), KEITHSENDSHELLOOOO ($3000)  and ZANDON ($6,000) but his true ‘turn of foot’ came from the closing race with BUY LAND AND SEE bumping him to the top with and added 63.25 pts to win the pot.

This was a game where a stable of around 300 total points was able to win the pot of gold and finishing at 306.40pts did just that for BEGGSIE cashing $1000 off of his $50 bet plus more in the $5 contest.

All photos by ABHD Photography 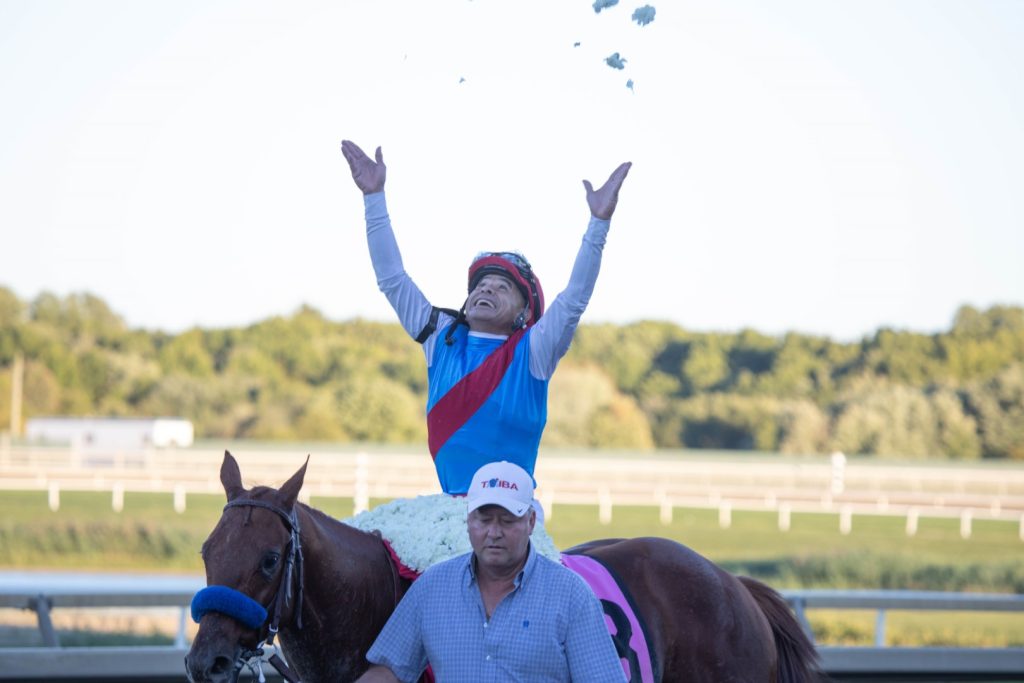 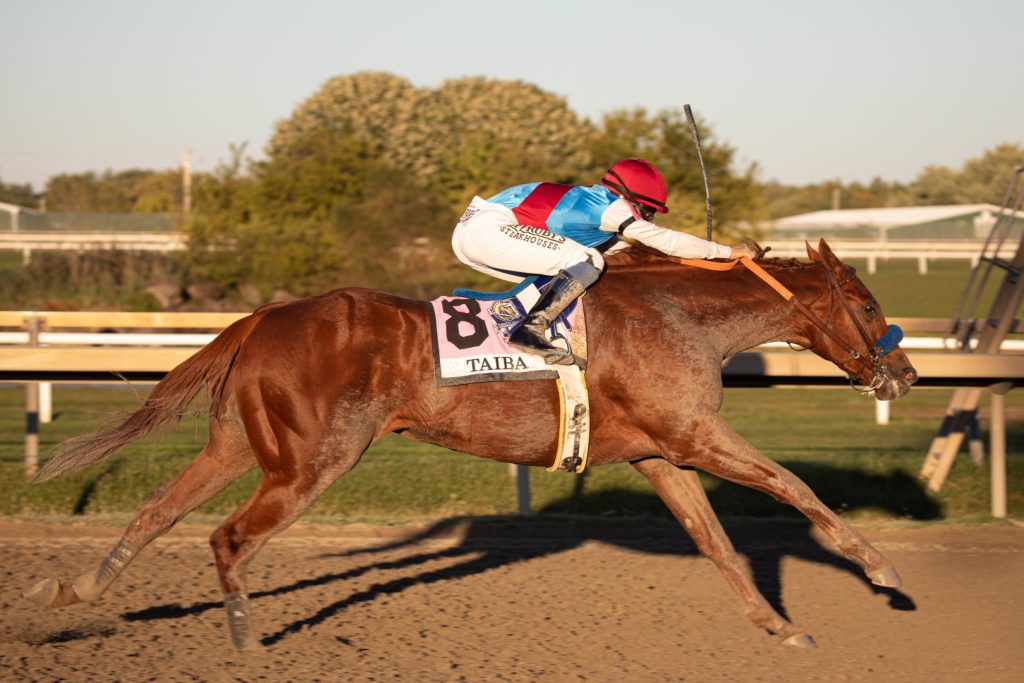 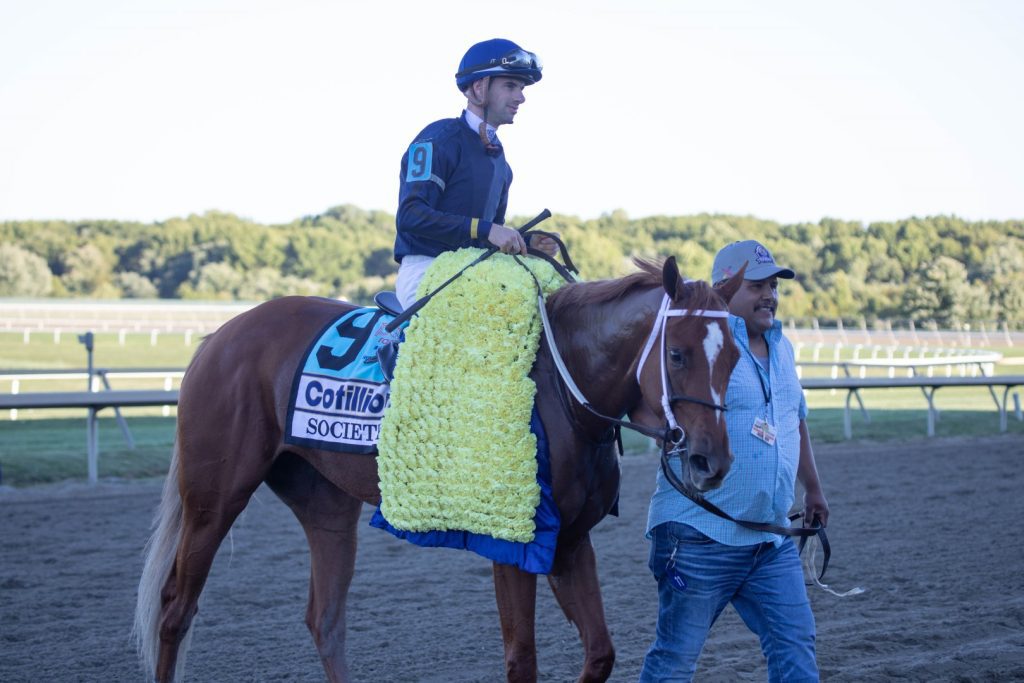 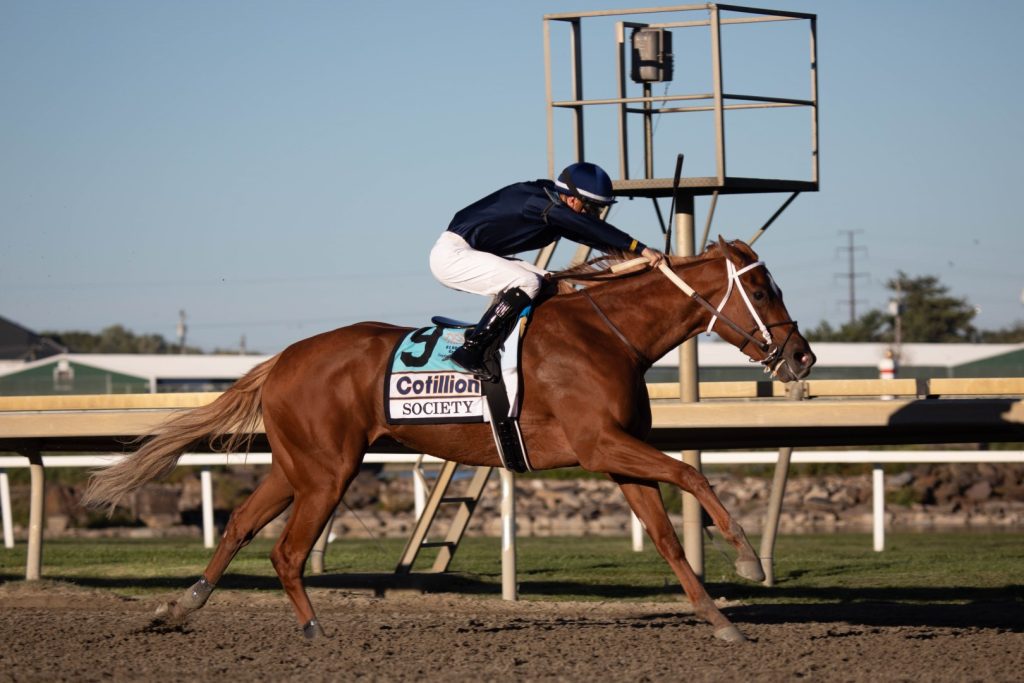